Sheila B. Ministries
Ministering to Women in All Seasons of Life

October 13, 2012 will forever mark a very important time in the life of Sheila B. Ministries. It was on this day that the S.T.A.N.D. (Sisters Touching Assisting Networking with Dignity) conference officially became a “national” conference! The S.T.A.N.D. conference began in Dallas, Texas in 1997 to minster to the spiritual needs of women, many of whom would accompany their spouses to the E.K. Bailey Int’l Expository Preaching Conference. In recent years, the S.T.A.N.D. conference grew in numbers and in name recognition, serving women in all stages and ages of life. When Sheila B. Ministries, Inc. was birthed in 2009, God began to increase the vision for serving women through S.T.A.N.D. and simultaneously, he began to increase the faith of his called-visionary, Dr. Sheila Bailey. As she talked with the Lord, and later shared with her family, confidants and her ministry board, it was evident that God was up to something, and it was larger than Dallas, Texas! It was time for S.T.A.N.D. to expand! God had a plan and His plan included a generous offer from Pastor S.J. Gilbert, II and his wonderful church, the Mount Sinai Baptist Church (MSBC) of Houston, Texas. They agreed to host the first S.T.A.N.D. one-day, expansion conference at their lovely church home.

Because of their generosity and hospitality, not only did S.T.A.N.D. expand…it exploded! With approximately 200 women attending from the local Houston area—many from partner churches of Sheila B. Ministries-- S. T.A.N.D. would never be the same again. The conference opened with a time of praise and worship which was so powerfully and ably led by Minister Gaye Arbuckle, national recording artist and Minister of Worship at the Concord Church in Dallas, Texas. The featured speakers, all of which are gifted and dynamic teachers in their own right, included Dr. Sheila B. and her daughters, Shenikwa Bailey Cager and Cokiesha Bailey Robinson. Dr. Bailey taught about the importance of women STANDing in unity and love, as we serve God and his people. Shenikwa challenged each woman to STAND when her courage is being tested and is under fire, as she shared from the life of Rahab. Finally, Cokiesha ended the day on a high note of worship, as she helped each woman realize that the only way to STAND in moments of crisis is to have first fallen at the Savior’s feet. 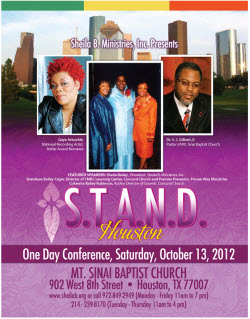 So what did the participants have to say? Pat Williams of Gethsemane Baptist Church in Houston attended the conference and when asked about her most memorable take-away from the day, she responded “I was inspired by Rahab’s story. It let me know that no matter what I have done, he will still be faithful to us, if we trust in him and honor his word.” Sis. Mary Andrews Paul from Greater Galilee Missionary Baptist Church added that the story of Rahab helped remind her that God can save your entire family and she was inspired to hold on to her hope that God still saves families!

Another conference participant commented that the S.T.A.N.D Houston conference was unique from other conferences because of the sisterhood she felt from all of the women that attended, even though they were from different churches. Sis. Bertha Dinkins, also of Greater Galilee Missionary Baptist Church in Houston shared that she was excited about attending S.T.A.N.D. Houston from the time she saw it in her church bulletin. She candidly shared that she is not usually timely for church, and her pastor lovingly teases her about it. He told her that she wouldn’t be on time for the conference. Well…Ms. Dinkins surprised a lot of people. She arrived at 7:45am for registration and called her pastor after she arrived to tell him that she was on time! And, she had such a great time that she stayed afterwards to share from her day’s experience.

Praise God that He enlarges our territory and increases our borders. S.T.A.N.D. will never be the same again.